Jim O’Connor of the Tucson Amateur Astronomy Association was kind enough to tell us more about this long-operating club located in one of the most important centers of astronomy in the United States. Here are Jim’s responses to questions posed by AstronomyConnect.com about this active amateur astronomy association.
1. When did your astronomy club get started?
We were founded in April 1954 as the Tucson Amateur Astronomers. During the space race, when we were very active in artificial satellite timings, and the Tucson newspapers often quoted the president of the TAA. This was confused with the Tucson Airport Authority, so we changed our name to the Tucson Astronomical and Astronautical Association. In the late 70's, we were no longer doing much "astronautically", so we became the Tucson Amateur Astronomy Association, retaining the nickname "T-triple-A".
2. What is the mission/purpose of your club?
TAAA has two fundamental missions. First, it is dedicated to supporting members’ observing goals and enhancing member enjoyment of exploring, observing, and learning about the objects in our solar system and beyond. Second, TAAA members share our experience with the public. From beginner to professional astronomer, with a telescope or without, we invite everyone to join us in this exciting and rewarding endeavor.
3. Do you have regular events or meetings?
We meet on the first Friday of the month on the University of Arizona campus, in the Steward Observatory lecture hall, and the public is invited to attend. Our meetings have two sections. There’s an initial “Fundamentals” segment, where basics such as double star observing or topics of space exploration are discussed. This is followed by an invited lecture by cutting edge researchers to present the latest discoveries and research in astronomy and cosmology. We also put on our own public star party twice a year for solar and night observing, teaching, and demonstration of the physical behavior of astronomical objects. 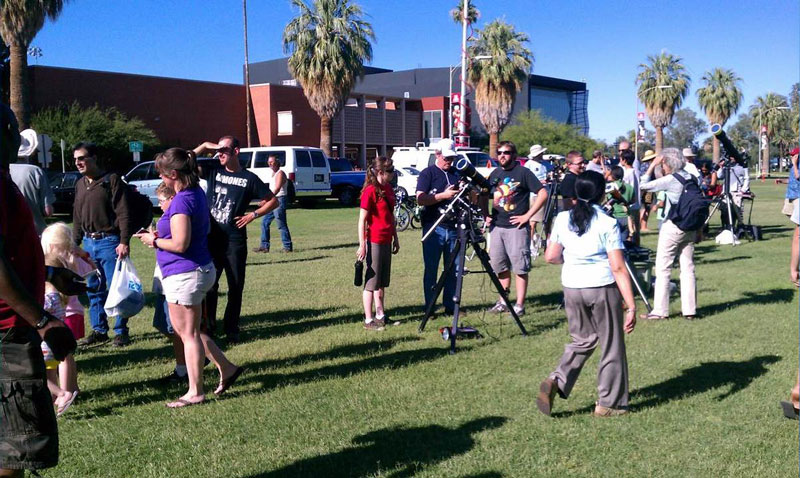 Fig 1: Public outreach event of the TAAA and David Levy's Sharing the Sky Foundation
4. How many members does your club have?
We currently have approximately 322 active members.
5. What is different about your club? What distinguishes it from other clubs?
Our association with the University of Arizona is a significant advantage, and we work closely with the Astronomy, Optical Sciences, Lunar and Planetary Laboratory, and Flandrau Planetarium to exchange services and understanding in real time.

In addition, our club is extremely active, both in public outreach and in member interest groups for specialized focus. We have active groups in several topic areas, all of which meet regularly. Our Special Interest Groups include:

6. What kind of public outreach activities are you involved in?
Our club performs from 4 to 15 public outreach support events each month for local schools, YMCA/YWCA, Boys and Girls clubs, and over a dozen annual state and county park events and other community festivals. Not only do we provide volunteer astronomers with telescopes, our Starry Messenger group will participate in many with hands-on demonstrations. We also provide telescopes and volunteers for Dr. David Levy, past club president, and his annual Sharing the Sky Foundation to promote public outreach. I personally take part in about six events each month in addition to coordinating the astronomer and night speaker activities for the Grand Canyon Star Party.

TAAA is a co-sponsor with the National Park Service of the Grand Canyon Star Party, an eight day-and-night event at the Grand Canyon for which I am the coordinator of South Rim activities. We gather over 100 volunteer astronomers from around the world for a public outreach, with daytime solar, lunar, and planetary viewing and night time telescope observing including live video for mobility and visually-challenged individuals. For June 2015, we had over 75,000 visitor contacts for the 8 day event. I usually do one of the eight night talks and also occasionally conduct one of the three nightly laser constellation tours, while my wife and two grandchildren fill in for me on my 18” truss dob and one of the live video setups.

The first is located close to Tucson for convenient travel, at a secured site not open to the public, where we have a permanent roll-off observatory containing a Meade 14” ACF/GPS SCT as well as six fully powered observing pads for club member use. We have two monthly club observing sessions at this site, as well as using the site for the Astronomy Fundamentals Special Interest Group activities. In storage at the site we have loaner telescopes and other equipment for member use, and we conduct training and assist newcomers to the avocation. We often conduct night sky orientation tours for those interested in the structure of the night sky, and teach cultural lore of the sky as well as enabling the observing experience.

Fig 2: Waiting for dark at the TAAA TIMPA star party

Our Deep Sky Observatory is located about 90 minutes east of Tucson near the Chiricahua Mountains, also a secured site, not open to the public, where we hold overnight club observing sessions two weekends each month. At this time, there is a 12’x14’ roll-off observatory with a 14” Celestron SCT mounted on an Astro-Physics AP1200 GOTO equatorial mount. There are currently 30 parking spaces (two paved handicapped access), 10 fully powered observing pads, several RV parking pads and electrical power, a bathroom and septic system, and an 8.4 meter diameter round concrete observing pad called the Amphitheater with an adjacent storage container holding an 18” Obsession Dobsonian telescope which can be wheeled out of the container onto the concrete observing pad for public events. We have a pavilion with a large overhead ramada with picnic tables for education and club social activities. Future plans include 12 sleeping rooms, 45 member observing pads with electricity, 15 member observatories, an education/activity building, a dome observatory, and a caretaker's residence. All costs for construction this location has been raised by donations and fund raising activities, and four members donated the 16 acre site property.

8. Can you describe a memorable experience at an outreach event?
Personally, having done public outreach for over 20 years, I have two. First, one night at the Grand Canyon Star Party, it was dusk and I was starting to align my 18” truss Dobsonian. I was using Vega, when a Japanese tour group came up and one young lady pointed to an engagement ring and kept saying Ring Star, Ring Star. None of the group spoke English except the tour guide. I let her climb the ladder and look at Vega, and she kept fondling her ring. It was dark enough that I pulled the scope down to The Ring nebula, and the young lady climbed again, stared quite a while, and came down in tears thanking me. Then the tour guide told me that her fiancé had given her the ring in the morning and got a telegram that his father had died in Japan and he had to hurry back. He told his future bride to find an astronomer to show her the Ring Star and The Ring, so she would think of him. There was not a dry eye in the area.

My second most memorable event was during an outreach at a mountain camp area for a group called Candlelighters, a support group for families of children with cancer. During the night the kids came through in groups. I had the Hercules Cluster on the live video monitor, and used the time to tell some Native American stories about the night sky. I pointed to the Milky Way and relayed the Seminole concept that the Great Rift dust lane is the gap between God’s arms formed by the Milky Way arms, protecting the creation he loves so no harm would come. A seven year old next to me stared quite a while, and said, “I see it. This is the first time I've felt better since I got sick.” 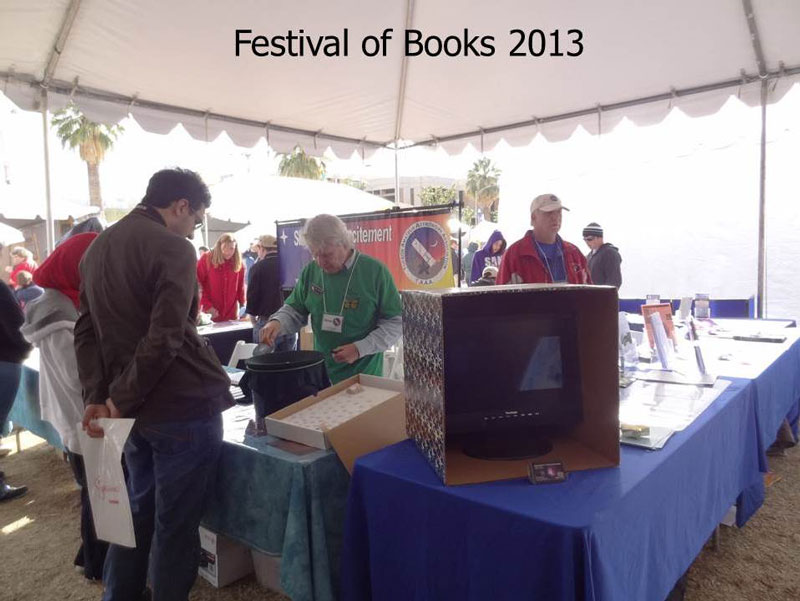 Fig 3: TAAA outreach at the 2013 Tucson Festival of Books

9. How has Agena AstroProducts helped your club or your members?
Our members are scattered around the state of Arizona, and individual polling is difficult. Personally, a 2” focuser I bought from Agena for my 90mm Orion ShortTube made it possible to use this instrument for public outreach with live video. With the original focuser, there was too much flexure to enable locating objects on the monitor. Now this is a perfect grab and go asset for public live video viewing in wide field to accompany the 10” SCT I use for basic live video. The technical support I received from Agena Astroproducts to acquire the correct focuser, and then to adapt the operation of the focuser to my needs, was priceless. Agena was a joy to work with.

10. Any suggestions or tips on how to get people interested in astronomy?
The first tip is to get out with the public by holding public star parties and getting out on special occasions such as lunar eclipses, comet passings, or other occasions at convenient locations.

Be prepared to pass out literature on your club’s activities in support of new members such as training in using new telescopes and teaching basic astronomy fundamentals.

Be sure to get contact information for anyone showing interest, and follow up with meeting and star party invitations to newcomers.

At club events for the public, be prepared to engage both adults and young folks in activities such as teaching how a simple telescope works and then, as the Sun sets, allow each individual to locate and view an object. We use the Moon or a bright planet at our public events.

Sky tours with a laser can make the night sky very personal when the legends are told along with the practical information.

Finally, it often takes multiple exposures to the topic, where each event is sort of a booster shot as well as the personal follow up with interested people, to solidify a desire to learn and experience the Universe around them. 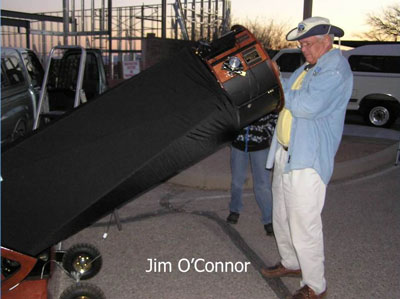 Jim O'Connor served for 25 years in the Air Force and retired in 1992 after serving as an Assistant Professor of Aeronautics at the United States Air Force Academy. He then retired again after another 23 years in the private sector as a Systems Engineer. Jim has been an amateur astronomer for over twenty years, with special interests in public outreach, astronomy education, and the scientific and cultural histories of astronomy.

Jim presents elements of the night sky from both a scientific and a cultural perspective during his public events at numerous venues, including school science nights, local, state, and national parks, and the annual Grand Canyon Star Party, where he is the South Rim Coordinator. He periodically teaches Introduction to Astronomy and the Cultural History of Astronomy adult education classes through the Osher Lifelong Learning Institute for the University of Arizona.